Fall the season of all things apple and pumpkin! I have talked about going to the apple orchard and how it is one of the things my family and I look forward to every year. We go out and pick apples and thing of all the things we can make with them as we eat so many of them. We use to go to apple orchards with all the fun and games when the girls were little but about 3 years ago we found a local farm that is owned and operated buy a family and is in their backyard. I say backyard but really it is a Fruit Farm and they have acres of blueberries (which we also pick there yearly since before we started picking apples there), raspberries, and apples. They have many varieties of apples and the kids love just running in the fields, carrying baskets, and pulling wagons with bushels full of apples. Yes I said bushels, we get a lot of apples! I dry some for snack, we make salads, batches and batches of applesauce, desserts, and countless recipes, and we eat them daily fresh for snacks. There is one thing I do miss about bigger apple orchards with all the frills, games, and little shops. I miss the apple cider donuts, there is just something about them that is so good! I am not a donut fan, I have them sometimes but they aren’t something I crave and more times than not am not impressed by them. However mini donuts and apple cider donuts are not the same! Grandma comes down and takes the girls for donuts, usually getting them a lot more than they need, and their dad is a donut fan so don’t worry they are not deprived children. Haha! I’ve made “Caramel” Apple Donuts, Apple Protein Donuts but I wanted something different and I really don’t know how the thought of warm donuts turned into these Caramel Apple Snack Bites but the family wasn’t complaining!

Maybe it was the Caramel Apple Sundae I had the night before? Because it was so good I was still thinking about it. 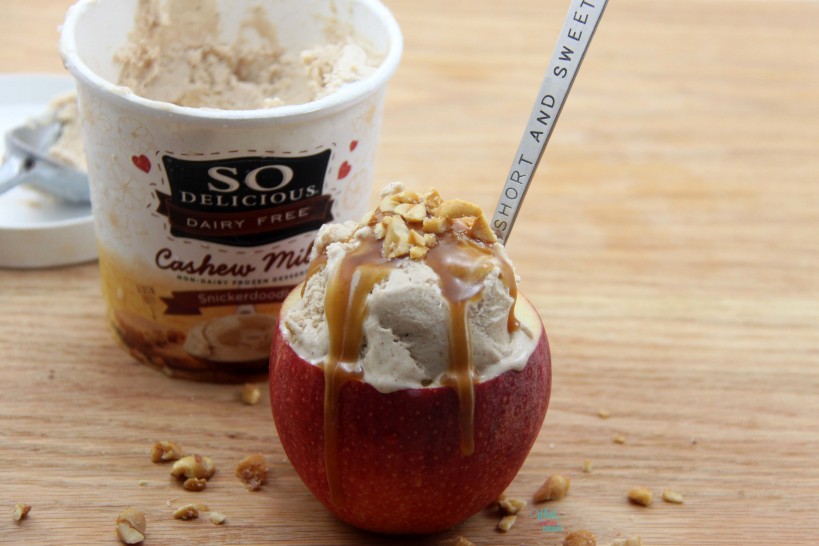 I call them snack bites even though they look a lot like my power balls, and even contain protein powder, because they do have sugar in them and are more of a snack. Still not that “bad” but not as healthy as my traditional power balls. These snack bites are actually pretty filling and could be swapped out for your child’s mini muffin bites or other breakfast pastries. A likes 3-4 of them paired with a steamer but usually I keep them in the freezer for snacks so they grab a couple after school, before or after gymnastics/soccer, or take them to school for snack. I like to grab one when I have a craving for something sweet, which usually hits me between trips top pick up the girls or after dinner. I do have to say though they didn’t cure my craving for apple cider donuts, and yes even attempted to warm one up and pretend.

*If using coconut flour in place of the protein powder you will most likely need to add a little more applesauce or water at the end as needed and noted below.

In a Vitamix, high-speed blender or food processor, blend dates and not water. They won’t come together in most cases as there isn’t enough material there. Add in the apple sauce, nut butter, sugar, coconut oil, vanilla, and sea salt and blend smooth. In a medium to large bowl mix together your coconut flour, protein powder, and cinnamon. Pour the wet mixture from the blender into the bowl, scraping it all out. Stir with a spatula until the mixture comes together. Than I like to use my hands to really mix it together. You want the mixture to come together not being to wet or too dry to roll into balls. As the moisture content in the coconut flour and protein powder can be different add a little water as needed or a little more flour. Add in your chopped apples. Roll into balls, mine are usually around 20g, making 30-32 balls. Roll into optional cinnamon sugar if desired. Store in an airtight container in refrigerator, or freezer for longer storage, until ready to eat (or a little before to thaw). Enjoy!
Caramel Apple Snack Bites make a #healthy treat! #SweatPink #BestLifeProject @VegaTeam @BareSnacks Click To Tweet

While I do receive some Vega products from time to time, which I listed as an option in this recipe, I do purchase much of it on my own. It has been my plant-based protein of choice since before I started blogging. Even though most Vega products used are purchased by myself I do add this disclaimer. I do not make any money off any Vega sales or posts. I only write about foods I love, my blog is an extension of my hobby to make fun healthy food creations for me and my family.

These look absolutely DREAMY!! I love that coconut sugar tastes so much like brown sugar, but healthier. Plus, you just can’t go wrong with Vega!!:)
Heather@TheSoulfulSpoon recently posted…Ten Things Tuesday: Week 18