A week into October and finally posting some pumpkin, only it isn’t pumpkin spice or sugary sweet. Instead going savory with Chana Masala with Pumpkin and Crispy Coconut Rice. Yes I am aware traditional Chana Masala is not made with pumpkin but I was making some for Baby G and had planned on making my Sweet Potato Yellow Curry with pumpkin but decided to switch things up!

While I was pregnant I got a love for curry, but it didn’t really get into it until after Baby G was born. Every since he was born my love for Thai and Indian food has been crazy. Luckily my husband is down with these cravings, the girls not so much. I’ve always loved Thai food, Indian food I haven’t had too much but remember the first time I had it as it was so memorable. Funny story, the first time we had Indian food as a family was in Ireland where it was very popular and very good, we all LOVED it. Guess we should have made it a regular thing when we got back home so they still loved it.

So I keep playing with recipes and hoping they’ll finally love it as much as we do. Luckily they’re all about homemade Naan bread and A (the youngest daughter) loves chickpeas and some of the dishes. S (the oldest daughter) who use to be a rice connoisseur is still a fan although she doesn’t love it as much as she use to. So long story short I can make delicious Thai and Indian food and there is something everyone loves even if it isn’t the final “sometimes fancy” meal. So A might run to the fridge and grab fresh mozzarella, tomato, basil, balsamic, and evoo for her Naan (or hummus) and a side of veggies. S will end up with rice, Naan, and whatever because recently we’ve hit the picky teenage years. Here is where I would insert an eye roll emoji or 2.

I made a few attempts at this Chana Masala with Pumpkin. The first with larger chunks of pumpkin that didn’t cook as quick as I would have liked them too and letting my husband pick the peppers and taste test. By the time it was done I was HANGRY and it was so SPICY it literally took my breath away. This batch didn’t even make to the girls for testing. I then tried to cook and mash the pumpkin for a thicker sauce, but really it wasn’t that pretty and reminded me more of a Indian Chili if there were such a thing.

Finally I got a mild version where you can taste all the flavors and it pairs perfectly with Naan and or Crispy Coconut Rice, or just rice the options are endless. Although I will say if you have never made Naan bread, DO IT! It’s so simple and delicious! I even bought a larger cast iron “pizza pan” to make more Naan at a time or as A requested larger Naan bread so we can make quick Naan pizzas. Which is perfect for when the family wants homemade pizza but didn’t give me enough notice to make the dough for our Neapolitan Pizza Crust. My husband is in charge of the Naan bread, he makes a standard recipe and I cook it a couple minutes per side on the cast iron pan and then he finishes it out on the grill. We add garlic and herbs but lately make it plain and add them on after so all the leftovers (we usually make a double batch) for lunches, sandwiches, sweet or savory combos.

My Chana Masala with Pumpkin as mentioned has pumpkin which isn’t in a traditional recipe but it has pretty much all the other traditional ingredients minus the Amchoor powder (aka mango powder) as I couldn’t find it anywhere. The main ingredient of Chana Masala is chickpeas, and then it has the other usual ingredients like onion, garlic, ginger, tomatoes, and spices.

I planned on serving with coconut rice and Naan bread and then saw Bobby Flay post a Crispy Coconut Rice on Rachel Ray. It was on in the background last week when Baby G was sick so I decided to make it again and try it with that since A had a friend over Friday and wanted to have homemade Naan bread. S thought it was just ok, I honestly thought she’d like it more as it was crunchy like hash browns and she loves those and fried rice actually both girls do (as does my husband). A, the non rice fan, actually liked it a lot. Just when you think you know what your kids like they change their minds, seriously I can’t keep up.

There are 4 ways to enjoy Chana Masala with Pumpkin, with Crispy Coconut Rice, plain Coconut Rice, with Naan Bread, or both. Well I guess that would be 5 depending on how you enjoy the coconut rice, or technically 7 if you decide to just have plain rice or plain rice and Naan bread.

While I would prefer to enjoy this on a Friday or Saturday night with a glass of wine and Netflix or a movie it’s also perfect for Meatless Monday!  There are more great Meatless Monday recipes linked up below and as always Deborah and I hope you join us and look forward to what’s cooking in your kitchen for Meatless Monday! 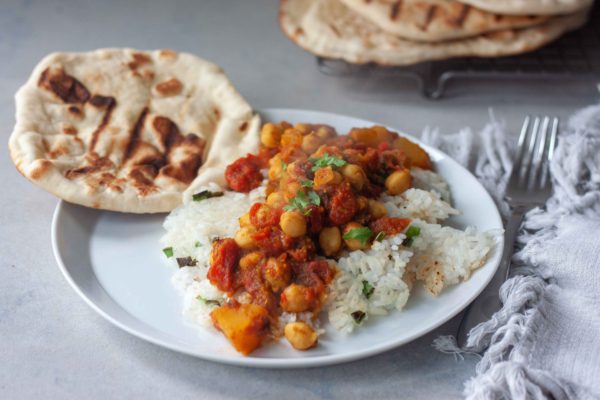 Print Recipe
Crispy Coconut Rice
Everything you love about coconut rice with a crispy crunchy top. Think rice cooked like hash browns, it takes rice to another level that you never knew existed.
Ingredients
Instructions

You are invited to the Inlinkz link party!

we love Chana Masala the spicer the better. Love the idea of adding in some pumpkin too. YUM!

This looks so so good! I love curry, and it’s such a perfect comfort food for cooler weather! :]!

Oh my goodness, this is right up my alley! I love the little extra something special with the Crispy Coconut Rice — yum!!