While recently trying to figure out a dessert to make for a get together and discussing with the family an Éclair Custard Cake I use to make came up. It was a favorite that I would bring to parties and get togethers in the summer as it didn’t require turning on the oven. It was chilled and refreshing but didn’t melt quick like ice cream on hot day. After thinking about it for a few days and drinking the last sip of Ripple Vanilla Milk that was left in the bottle from making a smoothie I instantly knew I had to make it! I’ve mentioned it before but I think Ripple Vanilla Milk tastes like the vanilla pudding cups and I use to eat as a kid. This is what inspired me to make it into pudding and make a vegan Éclair Custard Cake!

Layers of graham cracker soaked in vanilla custard or pudding topped with chocolate, oh so good it may have you shedding a tear after it’s gone. 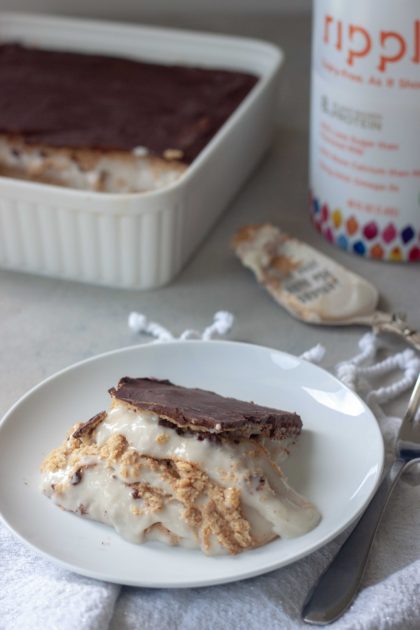 Maybe I love it even more because I have a serious love for donuts. Like I want a re-do on our Family Foodie Date Donut year. Don’t get me wrong I learned to really like and enjoy donuts that year when I really didn’t care about them before but they were by far one of my biggest pregnancy cravings and still have a special spot in my heart.

I tested and tested, so many times, and tried to get the pretty layers but didn’t want to lose the delicious flavor of the custard. We ate a lot of custard, pudding, cake, and cups! There weren’t any complaints though.

Yes I could have used a box pudding mix, more whipped cream but it wouldn’t have been the same. Trust me against better judgment I tried it with a box of pudding (yes it’s dairy free and vegan) and adding more coconut cream. The box I spit out! Adding more coconut cream added more of a coconut flavor and I lost that nostalgic pudding flavor I was after.

So while the cake is delicious, family, and mom approved and didn’t last long. Oh and there was even a fight over cleaning the crumbs from the pan if you’re looking for a “picture perfect” treat with pretty layers this one might not be for you. Don’t worry though I have an option for that! I’ll be sharing Éclair Custard Cups later this week! That are not only pretty but they also in single serving individual cups but also have a lighter texture option if you aren’t a fan of thick custard.

There are notes and while I was inspired to make this because Ripple Vanilla reminds me of those pudding cups I enjoyed as a kid I also tried it with other milks. I would not sure a thin or light 30-50 calorie milk, pick a thicker milk. I would not use soy but coconut or nut based milks are options. Sweetened homemade nut milks, like my Vanilla Cinnamon Almond Cashew Milk, are great options or if you like coconut you can use that but it will have more of a coconut flavor.

I LOVE to recreate dishes, or enjoy food in general, that brings back memories!

I hope you all have a great week and 4th of July!

Don’t forget it’s Meatless Monday and there are more great recipes linked up below and as always Deborah and I hope you join us and look forward to what’s cooking in your kitchen. 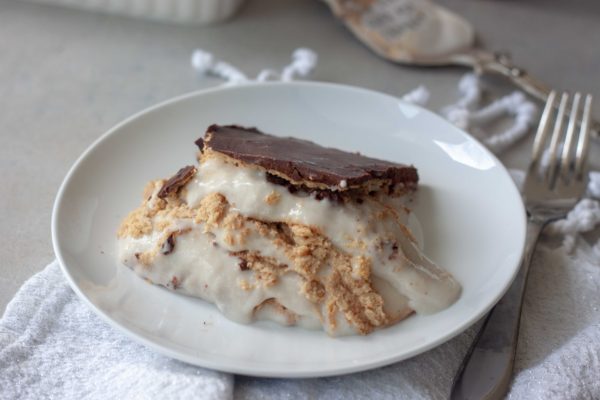 After testing many times I like to use a sweetened thicker vanilla milk like Ripple Vanilla Milk or sweetened Vanilla Coconut Milk. If using coconut milk it will have more of a coconut flavor if you are sensitive to it. If wanting to use a nut based milk I would recommend cashew milk, homemade or store bought. I would advise against using a light dairy free milk like a 30-50 calorie light version or soy milk. If using unsweetened milk you may want to increase sugar to 1/2 cup and if vanilla flavor is not strong in the milk using increase vanilla to 2 teaspoons.

You are invited to the Inlinkz link party!

I am all about cool desserts that don’t require cooking. I do love graham crackers too. Looks delicious!

I’ve been all about easy homemade desserts lately! Sounds delish!