I have made these frogs from apples before, as a snack, and my youngest requested them again. She asked if she could have them for dinner, to which I replied I think we are going to do soup and salad tonight. She then asked if she could have a frog with her salad and as you can see from the photo she got the dinner she wanted. If you are trying to get your child to eat more salads try this one!

What you need to create this salad:

Coconut cream (or a thick yogurt may work)

Dressing of choice or juice of half of an orange.

Prepare spinach and spread on a plate. Cut a cross in the strawberries from the tip down stopping just before the steam and place them on the spinach and allow them to open. Peel mandarin, separate, and make a flower or spiral with the segments.

For the frog you will want to quarter the apple and remove seeds. Cut a mouth in a quarter of the apple. I find it works best to cut a slit part way in the middle of the quarter and then cut a section out at an angle from each side of the slit. Place the apple on the plate, put two dots of coconut cream or a thick yogurt on for the eyes and place currants in the center. For the legs take one of the grapes and slice it in half lengthwise. Using a paring knife cut out two little triangles on each of the grapes creating a pointed toe in the middle. Place in front of the apple as shown. For the upper legs cut two grapes in half, length wise stopping before cutting all the way through so the halves are still connected. On one of the ends of the grape again cut two triangles out. Place on the frog as shown. Serve as is or dress with juice from half an orange or dressing of choice.

I was hoping to get a better picture but when I turned around to grab something my daughter was already munching on it. I hope your kids jump on this salad as quick as mine do! 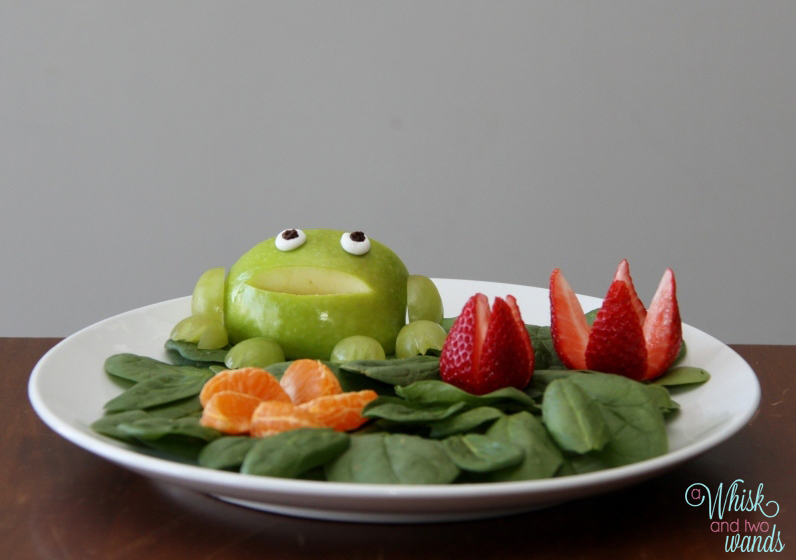