I’ve been wanting to share this recipe for a couple months and with the craziness last month I didn’t get around to it but what better time than Meatless Monday to share this Vegan Smokin’ Fettuccine Alfredo with Roasted Tomatoes! So much flavor in this filling pasta and it’s dairy free and vegan, well the sauce is as well as gluten free, it will just depend on the noodles used. We made homemade pasta which was vegan for this one but not gluten free using semolina flour.

When I got my hands on Miyoko’s Smoked VeganMozz of course the first thing I wanted to make was pizza because the regular VeganMozz is a staple and a game changer for me when it comes to homemade pizza night. I wanted to do something a little different though, but yes I did make some pizzas to and one will be posting soon. My husband has been making fresh homemade pasta since the beginning of the year and homemade fettuccine has been a family favorite for years. Usually using a standard heavy cream, butter, Parmesan cheese, with a pinch of nutmeg. Of course that’s not diary free and doesn’t sit well for the whole family so I’ve played around with many recipes over the years. While this isn’t going to be a complete substitute for the real thing the addition of a hint of smokey flavor and roasted tomatoes makes it it’s own thing and not a comparison or sub for the real thing that people often look for or happens in your head subconsciously.

Perfect for a relaxing nice dinner at home or carb loading before a weekend of soccer games. When I first married by husband over 15 years ago we use to have pasta a few times a week. After being (incorrectly) diagnosed with Celiac things changed. After that was changed we have had the occasional pasta night, more than occasional when he’s marathon training. Since we started making fresh homemade pasta it’s become an enjoyable weekend meal we try to fit in a couple times a month when we can like our homemade pizza nights. It’s like our homemade sourdough, although we make that at least once a week, where it’s a process that we enjoy each step and making it from scratch and find it fun and oddly even relaxing.

It is Meatless Monday so don’t forget to link up with my co-host Deborah and me and share a meatless meal you’re loving right now. If you don’t have a recipe to share I hope one of the ones below inspires you.

I’m also testing out a new recipe plug-in below making it easier for people to print and save recipes. I’d love to hear what you think of it. 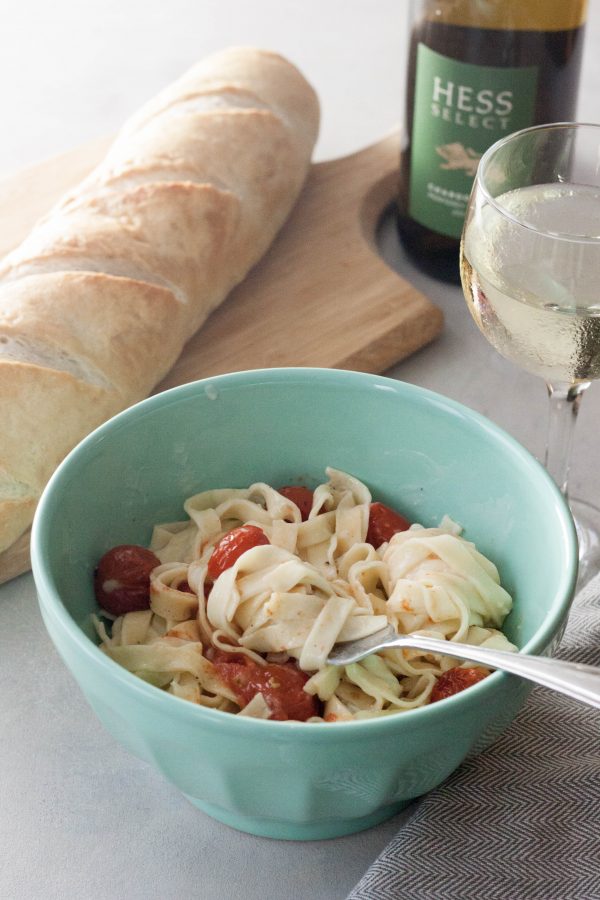 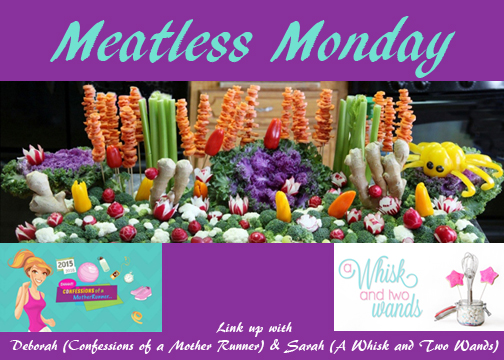 I happen to stumble upon it and happy I did. It’s got such great flavor and not overpowering but just a hint.

This looks SO creamy and delicious! I’ve never tried that brand of vegan mozz – I’ll have to look for it at my grocery store! <3
Jordan recently posted…Freezer Friendly Breakfast Burritos

The regular Miyoko’s Fresh VeganMozz is at Whole Foods but I don’t think the Smoked one is there yet but hopefully soon!

This is a perfect meal for Meatless Monday! Loving the fresh flavors going on with the smokey VeganMozz and roasted tomatoes! Ready to face-plant into a bowl of this fettuccine!
Taylor Kiser recently posted…Cajun Burgers with Sweet Potato Buns

Thank you, I’m pretty sure you’d twirl it and enjoy it instead of face-planting. 😉

Love this for a Meatless Monday option! I mean who could turn that recipe down! It sounds amazing!

Thank you, it’s just a hint but adds so much!

Ha. I think I made pasta all the time we were first married! I really want to learn to make our own as well. Nothing like it!
Lorie Yarro recently posted…4 Ingredient Nutella Swirl Ice Cream

It’s really not hard to make pasta. We’ve made a half dozen different recipes but basically just make a quick dough and we roll it out using a Kitchen-Aid attachment. We’ve also rolled out and made ravioli.

This sounds delicious! I’ve got to get my hands on the Miyoko’s Smokin’ Mozz!!

I believe the Smokin’ Mozz will be in stores later this month or next month but you can order on their website right now. With the expiration it’s easy to stock up.

You are the queen of vegan cheeses! This looks so yummy! I love the extra flavor from roasting the tomatoes!
Laura recently posted…Date, Coconut & Peanut Butter Granola Bars {+ A Vitamix & Petunia Pickle Bottom Giveaway}!!!

It’s so good and not overpowering!

roasted tomatoes makes everything so much more delicious!

Plus they add a pop of color!

How simple is this!? I need to look for this mozz!
Maria recently posted…Apple Cider Vinegar Detox Drink

I think it should be in stores soon, and might even be already depending on where you live since I heard summer, but has been on their website right now.

Aww thank you! If you’re ever in Minnesota you’ll have to let me know!

it looks healthy and yummy!